Journal for Christa—
When we stay at either Melody’s or Stef’s, it’s hard—nearly impossible—to tell what time it is in the mornings. The bedroom windows are heavily draped to trick the baby and toddler brains into thinking it’s still quite dark outside and way too early to get up. I don’t know how well it works with the kids, but it’s pretty effective with us.
During our recent visit to Kansas City to see the new baby, Timber, and to visit with everyone, we shared a room with not-quite-two Scout, who’s been sequestered to the pack n play, as he can now crawl out of his crib.
When Scout settles in for the night, he goes…prepared. One puzzle, a book, a menagerie of cars, the pile of little peoples we’d brought him—and most importantly…his glow worm. (Actually, the glow worm just stays in the pack n play.)
You can imagine our surprise and delight when he awoke in the darkness our first morning there and continually pushed the glow worm in order to see to put his puzzle together. Totally unaware of our presence in the guest bed, he continued to “light” his world by the glow of his toy—looking at his book, playing with his toys and talking to himself. Such is how Scout occupies himself until people begin to move about. 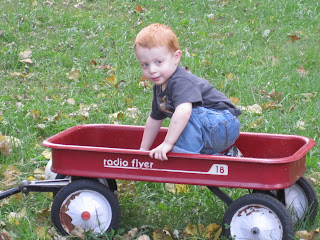 As I watched Scout’s routine each morning, it occurred to me that sometimes in reality it might not really be as dark as it seems. It was also interesting to watch his confident routine of waking in the dark. He simply reaches for his glow worm to light his world.
Sometimes, I need a “glow worm” in the darkness—
Oh yeah, I have Him…right here inside me.
Posted by the parishioner who doesn't do anything at 7:00 AM