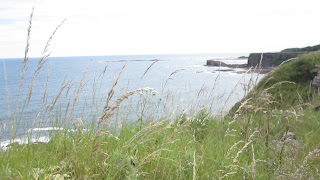 In the darkness and the void,
God is there; God is there.
Nations tremble, empty hearted,
In despair, in despair.
Haunted voices, lonely faces,
Searching, searching, unaware.
Will they find him? Do they know Him?
Do we care--to help them hear?
In the darkness of the waters,
Life is stirring; life is stirring;
In the silence, no one sees Him
But He’s there; yes, He’s there.
Haunted voices, lonely faces,
Weighted down with worldly care—
In the shadow, always present,
He is there; He is there.
In the darkness of the silence—
In the void, trembling blindness,
Be aware,
God is there.
And at the end of our greatest fear—
we shall find God.

Posted by the parishioner who doesn't do anything at 7:00 AM No comments:

I intend to get more organized this year. (Note, I did NOT say GET organized.) At my age one learns to choose her words carefully—mostly.
In some woman’s magazine, I read that one woman decides things like this: If it can be done in 30 seconds or less, she just does it. I’ve decided that’s a good mantra for someone as scattered as I am, along with all my stuff. I’ve actually been doing that for a few weeks and can say, it’s not a bad idea—well, I should confess, I still throw my coat over the back of a chair if I’m going out later in the evening. (There’s no sense in wasting 30 seconds when you’re just going to do it again in an hour or so.)
I’ve also decided to do one small thing that I want to get done each Saturday before I delve into the regular chores of housecleaning and schoolwork. There was no reason to make a list. I simply pulled out the summer list from 3 years ago. (That alone gives an indication of my present state of disarray.)
First, I solved the problem of making liners for the broken baskets in this little organizer that I’d purchased for $2 at a yard sale by buying new ones on sale. It is true, since the new baskets were smaller, that Jay graciously put little shelves in the slots (where shelves should have been in the first place, but what can you expect for two bucks?).
Then, I purchased doorstops for the rooms we ran wood flooring through and replaced the baseboards in the summer that Melody got married. (Now that she has 3 children, it was time to put that project behind us.) I assured Jay that I am clever enough to put them in myself if he’d just set up the drill for me. He didn’t look very convinced and drilled the holes himself.
There are still the hooks in the closet that go on the backs of the bathroom doors. (Thankfully, we purchased them when we replaced the towel racks that they match when we remodeled the upstairs baths.) The problem with that is the issue that they have a special thing that has to be put into the doors for them to hold, and Jay has no confidence in me with a drill.
Now, it does seem that my Saturday projects have required some of Jay’s attention—so, when I mentioned I planned to paint all the closets and he responded that he needed to finish out the baseboards in those while I had everything out of them—I assured him that closet painting is NOT a “one small Saturday thing.” To which he stated flatly that HE did not have a list—and I thought that was probably a good thing.
But, lest you think I’ve done nothing on my own, I have managed to update the pictures of the grandchildren on the wall behind the couch, grade 33 research papers, sew nifty little covers for my and 2 of my students’ Kindles, read 1 and 1/3 books for fun, and celebrate that the church after more than 24 years has hired Olivia and another lady to clean.
So, after doing that monthly duty for nearly a quarter of a century, I now truly am—
—the parishioner who doesn’t do anything
Posted by the parishioner who doesn't do anything at 8:20 PM 1 comment:

By wisdom the LORD laid the earth's foundations, by understanding he set the heavens in place; by his knowledge the deeps were divided, and the clouds let drop the dew.

If we were just smart emough, I guess we could understand creation and how it's all put together.

Maybe we go to God for wisdom because creation itself illlustrates how much wiser he is than us.

Maybe today's a good day to just be okay with that.
Posted by the parishioner who doesn't do anything at 7:22 AM No comments:

Last week I lost 3 things—3 things that in an uncanny and weird kind of way reflect who I am.
I lost my Aunt Ruth, who was the next best thing to my own mom. Aunt Ruth belonged to the past—not just because I spent so much time with her when I was a child, but because she encompassed a generation that’s only a memory for most of us. Married at 15, the mother of 6 children, Aunt Ruth didn’t even drive. She grew up on a farm during the Depression and understood the values and loyalty of hard work, family, and Christianity. I see in my memory my grandmother, mom, and aunts chatting around the table long after the last dish was washed and last dessert eaten. I could sit and listen to their voices for hours, and I did—silent, listening, taking in their women wisdom.
Second was the use of my laptop, which aptly symbolizes the life I now live. It’s like a piece of my body. It’s where I grade papers, write journals, and stay connected on Facebook. I control it, but in many ways it controls me. When it beeps I answer, even when it’s Jay (face timing me from upstairs) wanting something. I don’t know what its issue was—why I could not open any document on my trip to Illinois (There was  that incident in the airport when I dropped it), but for whatever reason it works now. When the kid at the genius bar gave it a clean bill of functionality, I was just thankful (not just because it was stinking expensive, but I’m getting a posh, fancy padded bag for it and the thought of sharing a computer with Jay next week after 59 research papers float into my inbox—I just could not deal with that.)
Third was a book—Achebe’s classic, Things Fall Apart. The realist in me recognizes it’s in a Southwest Airline dumpster. The romantic in me imagines some new—right out of college—literature teacher discovering it in the seat back pouch in front of her or him—and flipping through it to unfold years of highlighted passages, questions and comments, literary devices and techniques that jazz up the life of a lit teacher, but rarely her students. Oh, well…
It was an apt book to lose, for after all, wasn’t Achebe’s message that not all that was lost was bad, and not all that was gained was good—though much of it was? Achebe was a bridge, and I, too, long to be a bridge—a voice—a voice of the women of my heritage who beckon: “remember from wince you came; remember wherein your strength lies; remember it—when things fall apart.
Posted by the parishioner who doesn't do anything at 8:03 PM 1 comment:

Today, I want to share the words my cousin Norman penned about his mother, my Aunt Ruth, who died last Sunday night. I thought it was one of the most beautiful tributes I’d ever read, and the words are so true of her. My sister Lora commented that they reminded her of Proverbs 31, where it says, “Her children will rise up and call her blessed.” In this day where women desire and achieve so many things, I sometimes wonder if we do so at the expense of things more precious.
I did not ask Norman’s permission to send out his heartfelt words to the never-ending bytes of the web, but why would I? We’re cousins (and his sister--one of my best childhood buds--said it'd be fine).
Our mother leaves this earth to join her husband Norman in Heaven and be with our Lord. She leaves behind six children, 18 grandchildren, 33 great grandchildren, and 2  great great grandchildren. The legacy she leaves this family is of the most precious kind, a set of values revolving around God and family. Both our mother and father never put anything above the needs of the family. Sacrifice for us was an everyday occurrence. Our mother was our teacher from our earliest memories. We all learned to pray at an early age with our mother by our side, kneeling at the bedside teaching us the prayer which starts “Now I lay me down to sleep…”. She was by our side every day we went to school helping with homework and proud of whatever our accomplishments might be. When we were in need of correction, which was often, her punishment was usually, “I am going to tell you dad when he gets home”. It was usually just a threat and it generally worked. The most valued lesson our parents taught us was the demonstration of unconditional love for their children, and that unconditional love didn’t stop at the children. It was demonstrated to the grandchildren and great grandchildren as well. Mother ended each day by praying for those around her in need, saying the Lord’s Prayer and reciting the 23rd PSALMS. Our parents home has been the center of our universe for nearly 65 years and as mother leaves us to join our father in heaven, the memories we have as her children, grandchildren and great grandchildren have left an indelible impression on our hearts that will never be forgotten. We love her, miss her and are blessed she left us each other.
Posted by the parishioner who doesn't do anything at 1:33 PM 1 comment: