Journal for Christa—
I was flipping through last year’s journal this evening, when I ran across the beginning of an entry I started last year. At the time it just didn’t come together, and I wrote something else instead, but it’s a story worth the retelling. Maybe the timing last year was just wrong; maybe it’s right tonight. It went like this…
The nice thing about teaching is that sometimes as the students discuss, I learn about life with them. This week I learned about sacrifice, but maybe that’s not the right word—maybe it was about just doing what’s right and accepting it as God’s providence.
It surfaced as the class was exploring what it means to “really live” (prompted by Thoreau’s experience of living by Walden Pond). In the midst of their discussion, a student used her mom as an example to illustrate her point. Her mom’s dream had been to be a cosmetologist, but instead she married her husband and apparently the family business, a job she “hates.”
Now, on one hand, I’m a realist; on the other, a romantic. These days I feel like I live somewhere in between. I wonder what the thinkers and spinners of philosophy would advise her to do. Thoreau might tell her to escape and follow her dreams, even if they were “castles in the air.” Orman might tell her to “get out of the boat,” and Eldridge to find the adventure. She does none of these. Instead she works year after year at something that is far, far from her dreams.
But, that wasn’t what struck me; it was her daughter’s observation: “In this job that she hates, she has such an incredible impact!” Her point was that what her mom does was meaningful, even though she dislikes it. What a concept in our world today.
Some things in life just don’t work out—not for a day, a year, a lifetime. We might want most desperately for them to work, but they don’t. They just don’t work out.
I’ve thought a great deal the last few days about this woman that I don’t know—and her influence on the people at work, her influence on her daughter, her influence on me.
Posted by the parishioner who doesn't do anything at 7:00 AM 1 comment:

In the Rifts of Life

Journal for Christa—
Sometimes you just have to say no. There isn’t anything wrong with saying no, but no doesn’t have to be ugly—but no often is. I was reminded of that this weekend because of—let’s just say—a less than becoming attitude of mine last Friday, which I knew required an apology on my part first thing Monday morning.
Disagreements and fallouts are a part of life—they just are. And sometimes they’re never quite patched back up. But they should be—at least as much as we can make them so.
In the Bible even Paul and Barnabus got into such a tiff that they just went their separate ways. However, from Paul’s writings later, it appears that at some point they had made amends. And so should we.
It’s one thing to apologize for a nasty reaction, but when the hurt is deep, now that’s tough. And maybe things won’t ever be the way they were, but shouldn’t we at least reach out?
Or, maybe, someone’s reached back out to you, and you’re hesitating, not really knowing what to do. I have a girl like that in class this semester. She really is just afraid—afraid of getting hurt again.
Either way, when the ball’s in my court, I hope I don’t hold it too long.
Posted by the parishioner who doesn't do anything at 7:00 AM No comments:

Journal for Christa—
Jay says people who love each other have fun together. It’s so easy as life bears down on us to forget about fun—and what fun is.
I remember when Jay and I first started dancing, years ago. We were practicing one summer night when Chris barreled down the stairs. He stopped midway and commented, “Eric’s right. When you go to college, your parents get a life.”
What he didn’t know then, but he’s learning now, is that “life” or fun takes on a variety of faces. 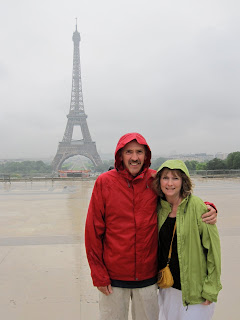 I have a theory about fun—If you don’t have fun at home, you aren’t likely to have fun in Paris. And, if you can’t have fun at MacDonald’s, you probably won’t have much fun at the Broadmoor either.
Real fun happens in the everyday. It’s laughing about what kids say and do at school. It’s raising your eyebrows at each other as you sit through a piano recital. It’s popcorn and milkshakes after the kids are in bed.
Real fun doesn’t have to be something special, but real fun is special.
This Saturday we’ll go to the Valentine’s dance. We’ll likely botch our new Rumba pattern at least once, dip fruit in the chocolate fountain, and eat way too much junk.
It will be fun.
Posted by the parishioner who doesn't do anything at 7:00 AM 2 comments: