Do not be alarmed if I should write of sadness, as life has its natural ebb and flow, not so unlike the River Thames. Daily, the Thames rises and falls with the tide—as much as 20 feet, I’m told.  And I believe it, for I’ve seen it with my own eyes. 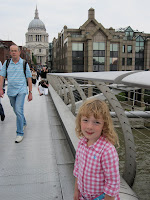 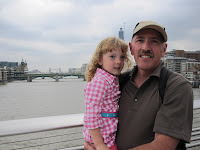 On an early afternoon, while crossing the Millennium Bridge, a foot bridge over the Thames in London, I noticed it was full, clear to the brim of the containment walls that Londoners built—I don’t know, maybe centuries ago—to hold back its daily influx.
Then, in the hours that followed, Joel and Kim saw a play in the The Globe, and we and the children took the tube across town to Hyde Park because Breck and Helen chose playing in the park and eating ice cream over a river cruise. 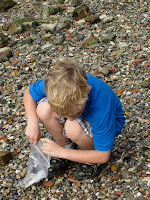 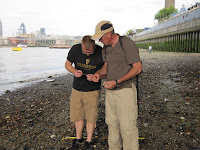 Arriving back (somewhat late) in the early evening, the tide had carried out the flood, revealing a shoreline along the Thames, accessed by a set of stairs along the retaining wall. In its decline, it’d left 400-year-old ceramic pipe stems and shards of broken pottery, all treasures for adventuresome children—and adults. Once they knew what to look for, they were on the hunt, seeking out “treasure” left by the river as it had bobbed along the tops of the walls. Soon, Jay was pulling plastic bags from his pack to hold their loot. The only mishap was an unexpected wave from a boat that swept over Helen’s shoes, soaking them through, which did cause considerable consternation for a time. 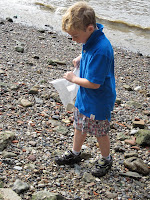 As evening turned to nightfall, which is still quite light in London this time of year, we turned our back on the Thames. Reaching the stairs, his face aglow with the excitement of success, Breck handed me his bag and exclaimed, “This was the best day ever!” 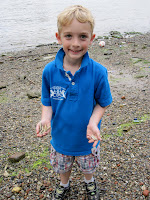 Hundreds cross the Millennium Bridge in a continuous stream. I wonder how many consider the river’s ebb and flow, and the flood that would bring destruction if not for the walls and the wake that deposits history—treasures for a child, broken though they be. I don’t know how many ponder the river’s ways. I’m only glad that I have.
Posted by the parishioner who doesn't do anything at 2:59 PM