Cast your bread upon the waters and after many days it’ll return to you. Eccl. 11:1 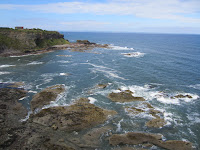 The image of the sea and the tide coming in, takes me back to the great oceans I’ve seen and the interminable ebb and flow of the water. From the waves of the North Sea crashing upon the cliffs below Tantallon’s  ruins to the calm flow of the Mediterranean lapping along the Cinque Terre in midsummer, the water continually churns up in a cycle of carrying out and bringing in. 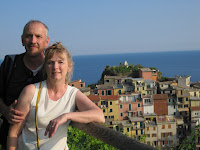 The oceans have always held an awesome wonder for me, probably because I’ve always lived quite landlocked. There’s just something soothing to my ears in the rhythmic flow, something restful to my eyes in the distant gaze where the water brushes the sky. There’s powerful enticement in water too blue to imagine—both dangerous and comforting.
And so, the writer of Ecclesiastics instructs us to send forth good works upon life’s sea—and watch in anticipation for their return. It is the joy of an old one’s soul to see their return after many ages. And who’s to say they won’t return again and again?
Posted by the parishioner who doesn't do anything at 8:59 AM