The following is a conversation between our eldest grandson and his cousin when they were four while playing at their grandparents, where both families were spending the summer.
Breck: “Let’s make a vampire house with bats and spiders and really dark.”
Thad: “Yeah, like a church!”
To put their conversation into context, Thad lives in Vienna, Austria, and even at age four, he’d been shuffled through a plethora of old European cathedrals of the Middle Ages. Their moms just laughed as they overheard them, just as I did when I read it on facebook. But, even now that they are a few years older, Thad’s four-year-old perception of church still intrigues me—maybe even more so because we’ve shuffled through our own share of old cathedrals the last two summers while vacationing with Joel’s family in Europe. 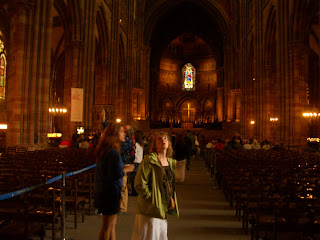 From Strasbourg's to Canterbury’s Cathedral, most of the churches we visited were dimly lit. Though the sun filters through astounding stained glass, it presents a mood of somberness. The vast expanse of the ceilings can make one feel small, and the flickering light of the candles and the hushed voices of the masses give the feeling of a place too holy. Though awed by the architectural mastery of each cathedral, I think I understand Thad’s perception of “church.”
And since the church actually is people, I have pondered frequently these last three years the condition of the church I carry around in my own soul. Is it dressed up on the outside with the stained glass of all the Bible stories and verses I’ve learned over the years, yet the only light is in the small flicker of candles in a corner? I sometimes wonder how cold and distant perhaps I feel to those around me? 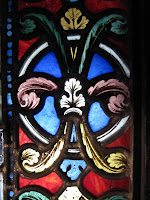 Though I’ve been taken in by the swell of Canterbury’s organ and the magnificence of the flying buttresses of Notre Dame, I think one of my favorite churches is in Heidelberg, kind of off the beaten path. Entering, I was struck by the brilliance of the light reflected in the white and brightly painted walls. It had a freshness about it.
But perhaps, best of all may be a small chapel in the heart of a Tuscan village. Kim had been there before, and when I walked in some time after her, she stood alone amidst its small simplicity. As I approached, she whispered, “This is my favorite church.” I could understand why. It was a place where a woman could rest her soul, a place of peace and solitude, hidden away from the cares of high expectations and life’s disappointments—where one could set aside all pretenses, fall before an alter as old as time itself and worship the God who sees beyond all human frailty and covers us with His hand.
Posted by the parishioner who doesn't do anything at 6:13 AM