Of Shepherds and Angels

"And there were shepherds watching their flocks by night…”
Who were these shepherds? Some of them might have been quite young—like David when he tended the family’s sheep. I see the shepherds as regular people, people who go to work each day, do their job, and are happy when something good comes their way.
I imagine they spent a great deal of time alone out in the wide, wild places of the world. There could be worse jobs.
Time alone gives one opportunity to ponder. Time in nature gives one plenty to ponder about. Shepherds may have dreamed big dreams, but each day probably found them walking the same hills and each night, guiding their flocks back to the fold.
Perhaps, they’d noticed a strange light in the sky. Perhaps, they were discussing this very phenomena when from the familiar heavens a host sang forth to them: “Glory to God in the Highest. Peace on earth; good will toward men!”
And as they bolted toward Bethlehem town, did any stay behind to care for the sheep? I bet you, not a one.
Angels are creatures of mystery, and it puzzles me that the whole village wasn’t awakened with their song. Maybe the heavenly beings chose only to reveal themselves to the shepherds. Maybe the shepherds alone had eyes to see them. 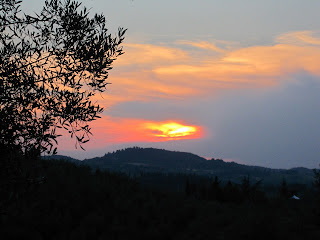 I desire to see beyond—to see beyond the shortsightedness of humanity. If the angels sang a song today, would I have ears to hear them and eyes to see? —to see the miracle within my reach?
Without wealth, fame, and admiration, the shepherds saw the angels from the world beyond—beyond humanity’s shores.
Posted by the parishioner who doesn't do anything at 8:03 PM