Do the Mountains Really Sing?

Shannon’s brother has done some research in quantum physics. Now, neither Shannon nor I are science types, but he was telling her about—remember that this was probably “dumbed down” some (or a lot) terminology-wise—how that all things are made up of tiny particles that are in constant motion. And even though we can’t hear it, that movement produces a humming sound. 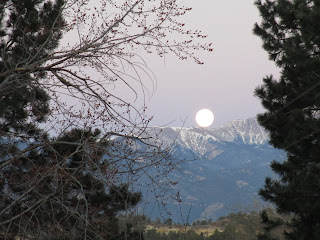 I could have been cloistered in my room grading the last of this year’s essays; but instead, I was leaning wide-eyed over the library counter as we thought of the verses in the Bible that we’d previously only taken metaphorically—like the mountains and the hills singing and the rocks crying out.
I’ve given a lot of contemplation to nature this spring—maybe because it’s been such a strikingly gorgeous one or possibly because it’s such a prominent motif in The Poisonwood Bible that we’ve read in AP the past few weeks.  But, for whatever reason—I’ve wondered if all creation would fly apart if the power of God didn’t hold it all together. No wonder the Bible tells of nature proclaiming the glory of God.
During Lent this year Melody said to me: “We have access to the same power that raised Jesus from the dead.” Now, that’s a thought to let our minds flow into and drift far and deep. No wonder the apostle Paul said to approach God’s throne with confidence. Every morning that we see the sun rise and every evening we hear the crickets call, they should beckon us to our knees to worship the Creator, in thanksgiving—in hope—in peace.
Look into the heavens or under the microscope and be amazed.
“Do not be anxious about anything, but in everything, by prayer and petition, with thanksgiving, present your requests to God.” (Phil. 4:6)
Posted by the parishioner who doesn't do anything at 9:53 AM