I’m feeling hemmed in—
Well, not really. When I truly feel hemmed in is when I’ve just finished grading research paper #37 of 90.
But, it is a strange feeling being in a house with all the windows plastic covered and sealed. The prepping is nearly done, and Jay’s nearly done in. In some ways it seems like not much has changed since we last painted the house 20 years ago—except that the painters are 20 years older, and today they fortunately have the help of the painter’s son who was then a toddler and is now recently a college graduate. The pictures I took this afternoon look eerily similar to the ones taken 20 years ago with the house all sealed tight and breathless.
Twenty years—a lot of living happens in 20 years. Houses have changed owners and colors, but not this one—although much has changed.
Late this afternoon, the painter’s wife picked him up from his day job and dropped him off. As he struck out to help Jay and his son, Jane and I chatted for a while. Twenty years ago we used to work together, and our daughter would babysit their children. Now, we rarely see them. It was worth getting the house painted just to catch up.
As they were driving over, Jane had asked her husband why he was so quiet. “Jane, I’m trying to psych myself up,” he’d stated. “I’m hoping to catch my third wind.” 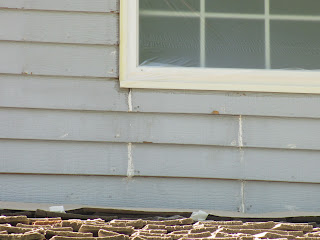 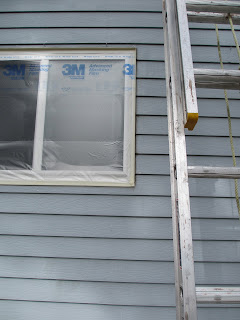 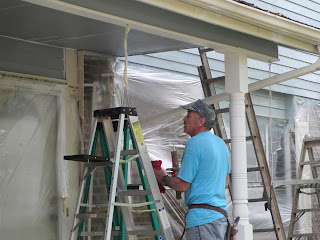 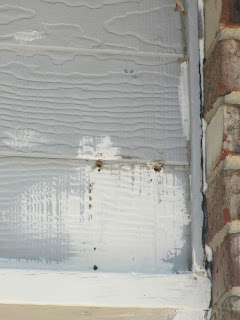 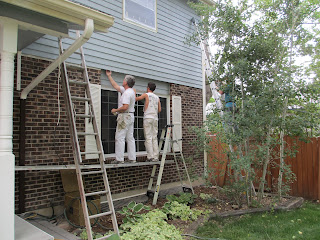 Sometimes, feeling hemmed in, we want to give up—but we can’t. Sometimes, giving up is simply the wrong thing to do. We've made commitments and people are depending on us. So, we press forward, waiting for that second wind that eventually comes.
But, I guess, at this point in life, we’re all hoping for a third wind—the one that will push us on through to the Golden Gates.
Ahh, I hear some laughter out there. Sounds like the wind has arrived…and some caffeinated Cokes.
Posted by the parishioner who doesn't do anything at 6:33 PM