Sometimes the greater joy is watching someone else’s.

“Jay, someone’s taking pictures of our house.”
And there he was—parked in front, snapping pictures, first of the house, then of that old tree in the front yard. 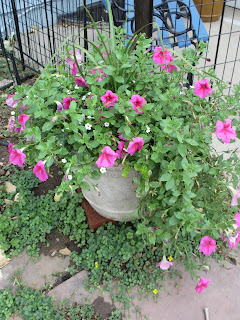 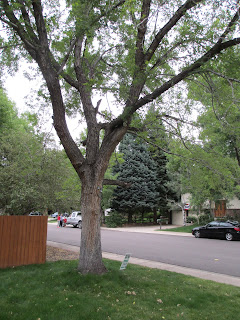 Jay stepped out the door: “Can I help you with something?”
“Yeah, I used to live here when I was a kid. When I was 4 to 7.”
After introductions and a brief history, Jay asked him if he’d like to look in back. “We’ve done a lot of work out there. Bring your kids. We have fish ponds.” 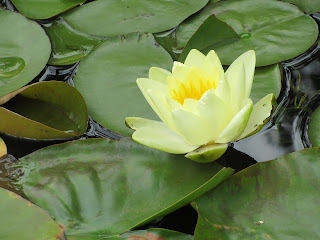 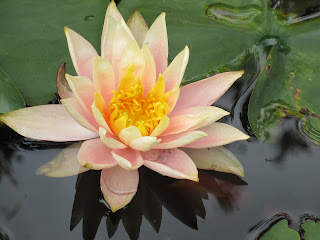 After slipping on sandals, I met his wife as she entered the garage, trailing behind a passel of kids, theirs and cousins. “Oh, I love your grape vines.” The children were already feeding fish.
The man’s face was a wonder as he took in everything. “We had a garden here.” 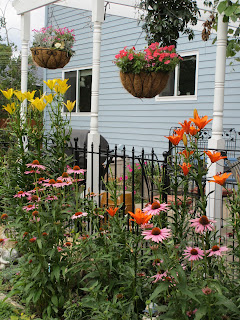 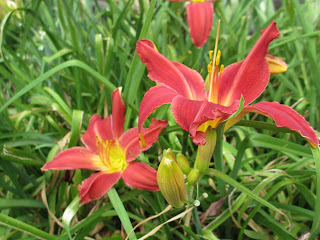 “Yeah, there was a garden there. Then we planted strawberries and later dug the pond.” He and Jay conversed back and forth.
“It looks nice terraced. It was just a hill, and one year it snowed so much we could step over that fence. It seemed so big in those days.”
I smiled. It’s just a street lot.

It’s funny how the world is so much bigger to children.

I wish we wouldn’t lose that.

“The only original owners are the Harsh’s. Do you remember them?”
“I do. My brother who’s 8 years older than me was friends with their son.” 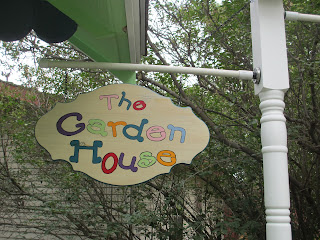 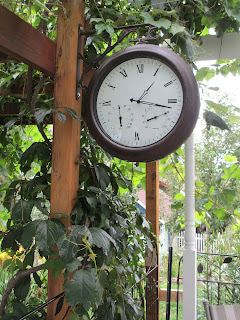 As he continued to snap pictures of the garden house, the flowers, the pergola, I whispered to Jay, “You should show him the kitchen.” Old dark cabinets changed to white, a wall removed and the ceiling raised. He filled his phone with pictures. “You don’t know how much my parents will enjoy seeing these pictures!”
He wanted to see the basement where they’d played and said, “My brother and I used to scrape oranges across this stucco wall.” I got a visual of little boys scraping oranges down the wall and decided he really hadn’t needed to share that.
After a picture of the fireplace (It’s original, though the rough ‘70s style mantel has been replaced for years), he stepped onto the front porch. “I don’t remember this. It was just a concrete slab.” The porch was one of Jay summer projects several years ago.
Then, after a shaking of hands and repeating of names, he walked across the lawn toward his car.
Suddenly, he stopped and turned, “Oh,” he said, “we used to call this tree Henry.”
Laughing, Jay stated, “And we gave him a face!”
Then off he drove, remembering a childhood—a part, I think, that was good.
I looked the old tree up and down and settled my gaze on its face with the eye that needs repainting: “After all these years, it’s nice to know your name—Henry.” 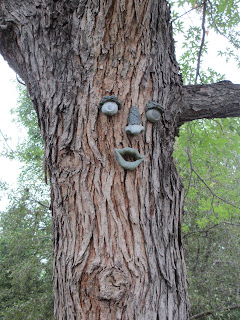 I’ll have to tell it to the children.
Posted by the parishioner who doesn't do anything at 1:30 AM